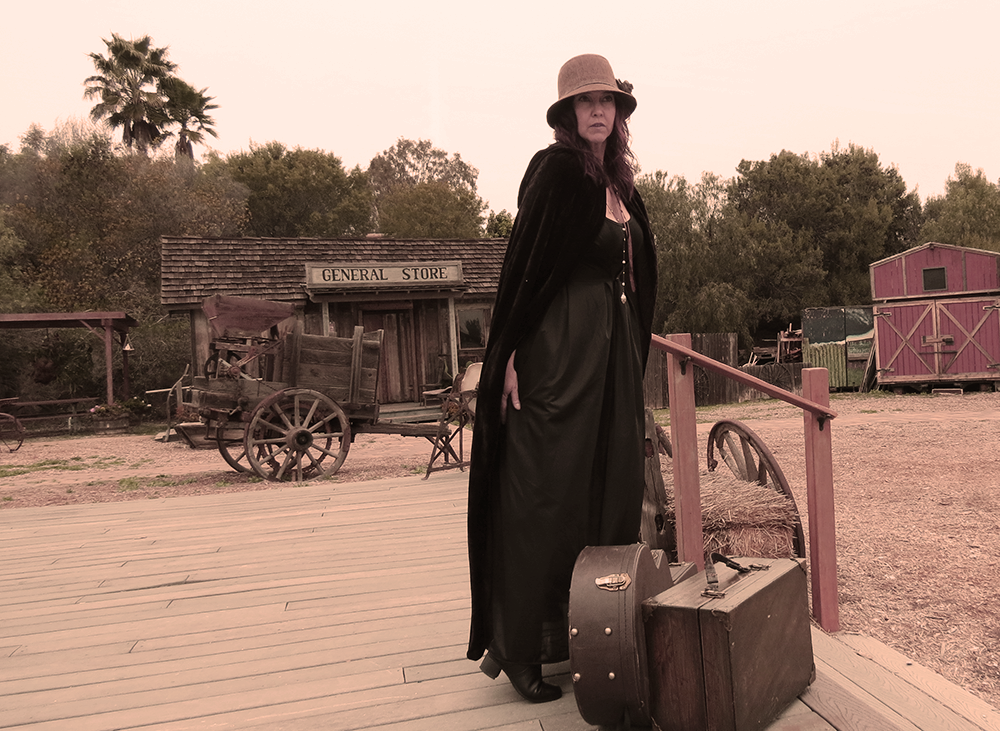 Chicago native, Astra Kelly, is a pure talent with a lyric-based, melodic sound and soaring vocals. Her voice and message are intentional and unfeigned, while her songs replicate otherwise indescribable emotions. She infuses metaphysical and psychological metaphors into her lyrics: mirroring the genuine human experience and all the beautiful grit that goes with it. Her performances are passionate, full of energy and a powerful expression of her art and sound. Eclectic in style and genre, her original music draws from her soulful Chicago roots fused with indie folk and americana and she uniquely pays tribute to other artists. She’s a career artist who has toured the country extensively, performs well over two hundred shows a year and has released eight records on her own label. Influenced by folk, country, and bluegrass, her latest release, “Chasing the Light,” is a journey of transformation from the inside out and connects to a universal heartbeat.

Upon landing in San Diego, she immersed herself in the SD music scene as she launched and DJ’d the Homegrown Hour on KPRI, co-hosted NBC 7/39’s Streetside San Diego and organized and hosted numerous concerts showcasing local acts. Her music video was showcased in the SD Film Festival and she’s received seven SD music award nominations. She writes and produces music for up and coming talents, has managed four recording studios, is a vocal and songwriting coach and a national voice over artist. She’s one of those rare talents that has been able to carve out a formidable career in the entertainment industry, while staying true to her art.

Born in Marvel, Arkansas and delivered by Dr. Wise, Astra Kelly had an early interest in music fueled by family jams, school choirs and formal music studies. Her first touring gig began when she dropped out of college to play rhythm guitar and vocals in a jam rock band, The Junction. Having toured nationally and sharing the stage with the likes of Widespread Panic and Marshall Tucker, the group went their own ways. She turned to the Chicago subways to hone her guitar skills (initially having to tape the pick to her hands to learn to hold it). Upon earning 50 bucks in two hours, she quit her day job and began performing 20-30 hours a week through bloody fingers, cold winters, and hoarse vocals. Her subway performances began to draw a steady audience and requests for copies of recorded material. She holed up in her apartment to make her first solo record “Stones, Bones, and Boxes” (December 1996) that featured a cast of star characters from the Chicago scene and led to her first solo performance to a sold out crowd at the famed Cubby Bear.

Kelly joined SUMO, a ten piece, talent packed acid jazz and funk improve group, who helped seed the acid jazz explosion in the Midwest. Never practicing once in their 3 ½ years they managed to pack houses every single week. She shared the stage with players who would later perform with Filter, The Goo Goo Dolls, The Smashing Pumpkins, Buck Cherry, and Macy Gray.

Her second record, “Subtown Rituals,” released in 1999 at a sold out show at Chicago’s, Martyr’s, showcased a melodic rock sound and featured her new band Far Rockaway. She ran out of money during recording, thus setting her on the studio management path as she traded time as an asst. manager at 35th St. studios in Chicago to pay off her recording debt. She also dove into visual arts painting a 6ft high by 80 ft. wide mural depicting the evolutionary path of humanity, commissioned by Pop’s On Chicago. At the same time, she founded The Usui Reiki School of Light and Touch delivering a “laying on of hands” healing technique to thousands. Then for no particular reason in June of ‘99, she knew it was time to leave and tour her solo act. She bought a conversion van and hit the road with her cat. Funding the tour primarily by busking (performing on the streets for cash) and selling CD’s out of her guitar case, she crashed on friends’ couches while booking and promoting shows as she went. While on the road, she released a solo/ acoustic live album, “Acoustic Soul Live” recorded at three live shows in Colorado in 2000.

She completed a 2 year, 85,000 mile tour that ended when she skidded on some black ice on the way to a gig in Colorado. Her tour van rolled and she landed upside down on a set of train tracks. In the light of the full moon with her posters and CD’s scattered along the highway, she grabbed her guitar and got to safety just in time to watch a train charge down the tracks and crash into her tour van. This symbolic moment on her musical path launched her into a new wave of creativity.

Kelly landed in New Mexico, got married, then took to writing songs about her failed marriage, managed Stepbridge Studios (Santa Fe, NM), and reunited with her long lost sister all while working on her 2004 Self-Titled EP in conjunction with producer/composer, Bob DeMarco (primary writer for Paramount TV). During this period she was dividing her time between Santa Fe and Los Angeles to continue working on the record. She was playing solo shows in both cities and initiated a new project in Santa Fe called, FLY, based on her improvisational experiences in Chicago. In addition, she collaborated on regional and national artists’ recordings and compilations including WC Handy award winner Eddie Turners “Rise.” “Rise” was produced by famed composer/artist, Kenny Passarelli (Joe Walsh, Elton John) who lent his extraordinary bass stylings to some of Astra’s tracks on “Interim” (an unreleased album).

Starving for water and change, she was ready to leave the southwest. Her arrival in San Diego in 2006 became a huge step in the slow climb. She found a desk job at the AAA radio station 102.1 KPRI and was pegged as a voice talent by the owner who coached her into DJ’ing. She quickly moved from overnights to producing her own local music show, “The KPRI Homegrown Hour” from January 2007 to May 2009. She also guest hosted NBC 7/39’s Street Side San Diego introducing San Diego audiences to local and national touring artists.

In January 2010, she released the EP “Battling the Sun” with cover artwork by local San Diego artist Billy Martinez. “The sun is a metaphor for our personal power and confidence and how it’s a waste of time to battle ourselves – it’s a battle that is impossible to win. Being a musician seems like a battle much of the time, but in the end it is a shared dream, that takes more than just the players to realize. So battling yourself is like ignoring the bigger picture and the common goal.” She was nominated seven times for a San Diego Music Award including Best Acoustic Artist, Best Local Recording, Best Pop and Best Rock Album, and her music video “All I Got” was showcased in the 2009 San Diego Film Festival.

She continued to perform, opening for Collective Soul, Sara Bareilles, and Shawn Mullins, made the rounds through local media, found a killer band and toured the coast. She continued running recording studios: first Studiowest (San Diego, CA), then Capricorn Studios (San Diego, CA). She dove into consulting, writing and producing music for other artists in addition to recording her sixth CD, “Timebomb” in July 2011. “Timebomb” contains five new band tracks, including a full band version of the title track from the “Battling the Sun” EP, plus three remixes from San Diego local DJ’s – Club mix, Drum&Bass, as well as a fun, cerebral remix that toast to Kelly’s eclectic spirit. For Kelly, it was a very fulfilling record to make and expresses some very basic and universal themes…the power of music to inspire and serve as a soundtrack for our lives (Music), finding the love of our life (These Days), and holding onto to dreams and goals and never letting go (Like Never Before). The album’s cover art was done by San Diego local Carlos Foster and inspired by the French novella by Antoine de Saint-Exupéry “The Little Prince.” Kelly’s father read her the book when she was a young girl.

Kelly’s creative expressions and business savvy extend far beyond her musical talents. She revealed her Broken Record artwork, in which she breaks salvaged vinyl records to pieces and reassembles them in forms on canvas. She’s launched a music industry networking company called The MIC Network and has developed educational programs for bands as well as a music based reality television series. She’s been the voice of commercials for outfits such as Lexus, Starbucks, Motel 6, Southwest Airlines, and the American Diabetes Foundation, to name a few.

After Timebomb, Astra began a journey of re-invention; exploring genres, writing with other artists, and returning to her “girl with a guitar” roots. Her seventh independent album release (2016), “Back to Ten” features the contributions of ten local artists including: Gayle Skidmore, Jeff Berkley, Carissa Schroeder (co-writer), Cathryn Beeks (co-writer), Trent Hancock, Podunk Nowhere, Matt Davies, Marta Z., Simeon Flick and Josie LaValle (co-writer.) Engineer, Josh Mallit, co-produced the album at Rarefied Recording in North Park. Guest artists were given just acoustic guitar and vocal tracks and invited to add their own unique stylings to a song. Her latest album, “Chasing the Light,” draws upon influences from folk, country and bluegrass and was produced by local star producer, Jeff Berkley. She continues to build upon the return to her girl and a guitar roots and expresses themes that connect to raw human experience and a universal heartbeat.